It’s always great to hear from our members who have left the site because they’ve found exactly what they were looking for. It’s even better when we get to share these stories with you! Read on to find out how these couples found their happily ever after on the WhiteLabelDating.com platform!

I had only been a site member for about 2 weeks when I first "winked" at Belinda. She "winked" back at me (having been on the site for about a month) and after exchanging a few messages we got in touch by phone. Something sparked between us and for the first week we were having three hour conversations every night on the phone (thank god for ring-back after 59 minutes).

We arranged our first date a week after we had first exchanged messages; a lunch-time date on the 24th July. This was followed by another meet for lunch the next day and I think that we both knew on this second date that there was definitely a strong attraction for each other. We continued our meets and visited each other’s houses and in October we went on our first holiday together, two weeks in Lindos, where we had a fantastic time. This was followed by a two week Caribbean cruise in December. It was during this cruise, when docked in Martinique on Belinda's birthday, that I proposed to her. She made me the happiest man by saying "yes". The photograph was taken on Belinda's birthday on board ship.

Since then, we have had a week together in a beautiful log cabin in a forest near York and another two weeks in Lindos in May. Life together for us is so very special. We have so much in common and haven't been apart since last August. Thanks to Mature Free and Single for bringing us together.

I met Nigel on Plenty of Size after a bad experience on another site for larger people. I was a bit hesitant at first, but Nigel put me at ease and has been wonderful since. We first started talking online on January 12th and finally agreed to meet in early February. We’ve been together ever since. At present Nigel and I live 80 miles apart. We see each other every weekend when he comes to stay with me and I try and get to him during the week to coincide with his day off. Although I’ve only been down to see him a few times since we’ve been together, he hasn’t complained once and I’m looking at options to stay with him more often.

We have shared many trips and days out that we have thoroughly enjoyed and have plenty of pictures to look back on. We are enjoying each other’s company and miss each other a lot when we’re apart, so make the most of our time together. It's a shame that we didn’t meet years ago, but the main thing is that we’re together now and care for each other deeply.

We have met each other’s families and everyone thinks that we’re a good match. I'd like to personally thank you guys for bringing us together. I hope that other people have the same luck as we did in finding their matches. One thing I will say is that the compatibility reports that Plenty of Size run were spot on with Nigel and I; it's amazing how on the mark it was considering you have met neither of us. 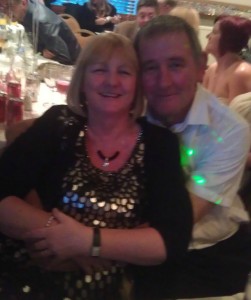 When I had a look at Forces Dating I was very impressed with it. I had quite a few ladies view my profile but the one who caught my eye was Bev. We started with sending messages, then swapped phone numbers and from there we met and have gotten on very well. We only live a short distance away from one another too which is perfect. The future looks bright for us, although no weddings bells just yet! Once again thank you for helping us find each other on your great site.