For the last month, we've been locked into a furious battle with the Great British Summer for the undivided attention of our members. And guess what? I think we're winning!

Soaring temperatures across the UK could have given members a pretty good reason to abandon their quest to find love online in favour of lounging in the park. Luckily, the Comms team were on hand, working harder than ever, to highlight the (many) reasons for sticking with online dating.

Engagement campaigns in July centered around reminding members of the mobile compatibility of sites on the WhiteLabelDating.com network, stressing that being out-and-about doesn't mean being out of touch with your dating profile. CRM campaigns also drew attention to bolt-on services, icebreaker messages, and the launch of our new-and-improved instant messaging system which went live in the last week of July - you'll be pleased to know it has proven hugely popular.

Always looking for ways to add value to our service, this month's issue of our regular 'Dating Coach' campaign addressed a number of dating issues to guide members through their dating journey. Next up was an extensive campaign focusing on UK summer festivals and their function as great places to go on dates and meet new people. We also included some alternative date ideas for sun-worshippers, and those adverse to the heatwave. 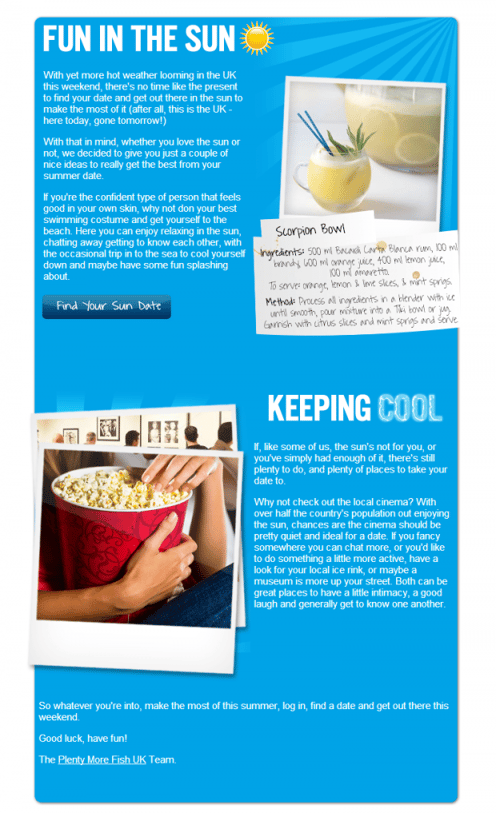 We wouldn't have been doing our job if we didn't include some special offer activity too. July offered great opportunities for regional and seasonal promotions. With the US celebrating 4th of July and Britain going Wimbledon-crazy in the first week, members in those countries received a bit of extra-special attention. The success of our "free read week" on a section of the South African network in June meant that we rolled out the concept to the rest of South Africa and Australia in July; it welcomed an equally positive reception. We rounded off the month with a competitive discount offer, open to all other territories, to huge success.

In August, we'll be keeping members engaged with more tips, advice and feature campaigns, leaving them primed for the occasional special offer and a few seasonal campaigns too. Until next month!

Top 5 tips to give your site a seasonal look

December has come around very quickly this year! In the last week before Christmas, make sure you have spruced up your sites and bring some of that festive cheer to your landing page. My top 5 suggestions below will get your site into the Christmas spirit.

We typically see an uplift in online dating traffic over Bank Holiday weekends. With May Bank Holiday just around the corner, now is the time to prepare great blog content that will engage your audience and generate conversions.

Boost your profits over the seasonal peak period