With a huge 450% increase in photo uploads last month, the comms team wanted to ensure this month’s comms campaigns were just as successful! From Olympic themed offers to Election Day featured members campaigns, here are just a few examples of what we sent to members throughout August.

On August 3rd, we sent out a themed featured members campaign to all South African networks to celebrate their Election Day! The response rate from members doubled in comparison to other non-themed campaigns. 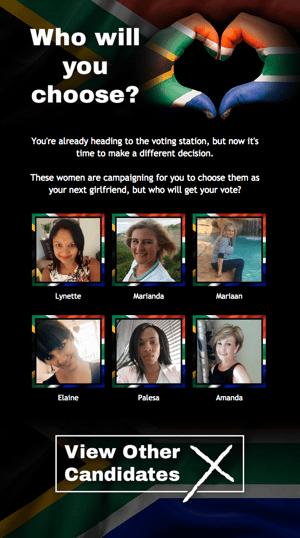 We sent a prompt to all members on the General/Mature network on the 3rd August to remind them to fill out the question and answer section. It was a repeat of the campaign that we sent out in May and it increased answer submission by 67%!

To all US networks on 6th August, we sent out a two hour Free read offer to allow users to respond to members who had previously contacted when they might not have been online. This increased the number of active and online members by 50%!

All mainstream networks were sent a Looking For prompt on 24th August. This served as a reminder to members to fill out the ‘Looking For’ tab to help them narrow down their search to find love. This increased ‘Looking For’ submissions by a huge 103%!

To encourage members to upgrade their membership, we offered discounted memberships at the end of the month. The campaign included reasons five reasons why members should upgrade, for example, “you’ll be able to send unlimited messages to all of our lovely singles”. This increased upgrades by 26%.

As summer comes to an end, we will be working on some more autumnal themed campaigns for September. Keep an eye out for these over the next month!

April comms round up

With a double bank holiday falling in March and April, last month was a big month to grow on! We wanted to make sure that member engagement was still continuing to grow and offers acquired big uptakes.

April comms round up

As Spring is in full swing and another Bank Holiday is just around the corner, our comms team have sprung into action this month and created some great campaigns to ensure engagement and activity remained high during April.

August comms round up