May was a really busy month for the comms team who sent out almost 20 engagement campaigns to our members!

Continue reading to find out the positive impact our offers had on upgrades, profile submissions and overall user engagement.

To honour May Day in the UK and Ireland as well as Workers’ Day in South Africa, we offered members in these networks free access to their inbox between 12pm and 12am on May 1st. Both of these free reads contributed to a 58% increase in peak basic members online.

To celebrate Cinco de Mayo in the US (a day that commemorates the Mexican Army's victory over the French forces) we offered US networks a discounted membership rate between the 6th and 7th of May. This increased upgrades during this period by 47% and re-initials by a huge 180%!

For Mother’s Day in Australia, Canada, New Zealand and South Africa we offered Mainstream networks a small discount off their membership. This had a small effect on upgrades but served as an extra offer to increase engagement. 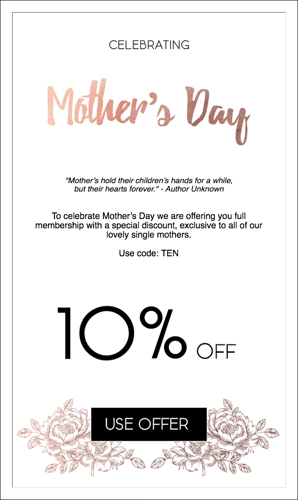 In the middle of the month, we offered all networks and territories a one day opportunity to upgrade. This took place on May 15th and contributed to a 61% increase in upgrades as well as a 133% increase in re-initials - this is the biggest daily increase from an application-wide offer ever!

End of May discount offer

Our bank holiday offer was extended from the 27th May - 31st May, rather than just being from 27th May - 29th. The offer increased upgrades by 38% and re-initials by an impressive 87%!

If you have a question about any of May’s comms campaigns, please get in touch with your Partner Manager. If not, keep your eyes peeled for what we have in store for June!

January is the busiest month for online dating with more people making it their New Year’s resolution to find love!